Wow it’s so rare that I get physical cards nowadays! Most communication is done electronically through email and dots on the computer, that I’ve sort of forgotten the joys of touching a real card. So I’m really happy when Tammy passed me a Thank You card recently. It brings so much joy to my heart to read what she has written in it. This will definitely be a pick-me-up read when I go through tough times and need encouraging! Thank you Jordan and Tammy for your friendship. I really appreciate the both of you very much and pray for lots of wonderful years for the both of you!

Click here instead to watch their wedding highlight video. 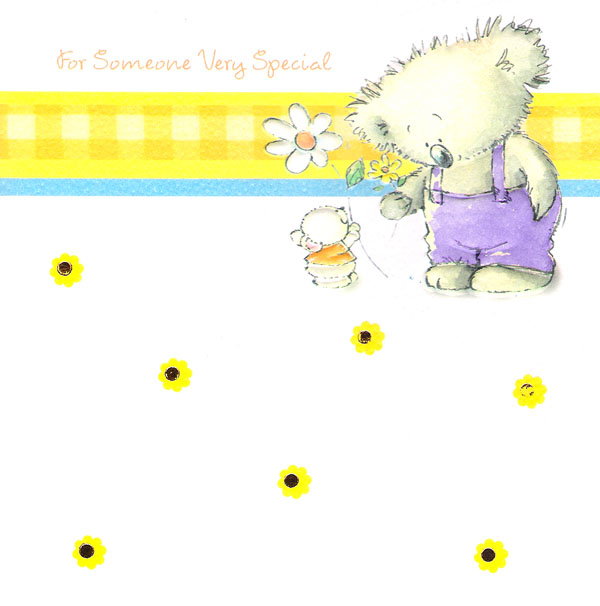 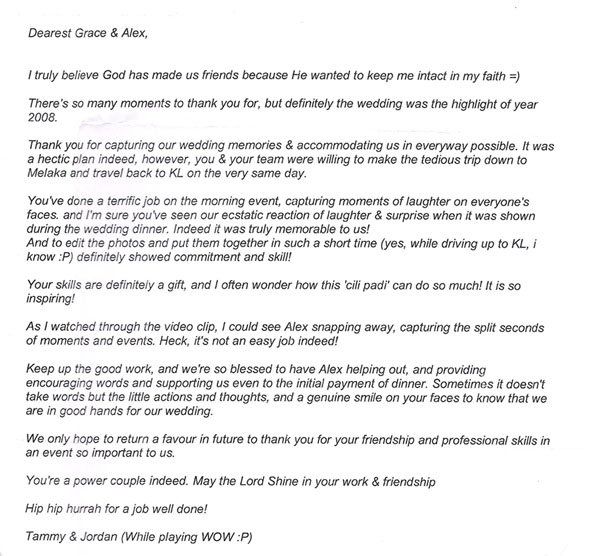 The Wedding of Jordan & Tammy

Tammy and I have been friends since we were in kindergarten. I knew Jordan too when I was about 5 and we all grew up in Malacca. It’s such an honour whenever I am hired to shoot a friend’s wedding. The job becomes more meaningful considering the long history we had together as friends. Tammy is the most photogenic bride I know. She’s really tall, model like and has a wonderful dazzling smile. Jordan is such a lucky man!

We had to travel a lot for this wedding. Alex, Kee Sitt, Sharon and I traveled to Malacca the day before the wedding. The games and tea ceremony was done in Malacca, and after lunch, we packed into the car, and went back north towards KL. I had to do the photo slideshow, but since there was not much time left (we left Malacca at 2pm, and had to be at the hotel in KL by 6pm!)…. I had to start off the slideshow in the car. Got my notebook, hard drive fired up, a sunshade on my head to block off the sun and did the work while we were in the car on the way up to KL. We even did a behind the scenes video of this… it’ll come up soon! Such a close call… when I arrived back in KL, I only had an hour to touch up the photos and then render the video while we were on the way to the next destination – Equatorial Hotel, KL. Below are some of the photos we took during the day.

These poor guys… they had to submit to the wishes of the chee muis.. these guys and girls have been friends since secondary school.. so there was absolutely no mercy for the guys!

Poor Ashish had to swallow a whole lump of wasabi!! That was so evil… I am sure that was like half a tube or something.

Then of course Jordan had to do some pumping… work for the woman!

The guys were so naughty – after wearing the disposable underwear, they tried to ‘surprise’ the girls by putting the undies on their heads!

Which I substituted for a long white veil later on… this was taken nearby Tammy’s home… at a so-called paddy field. I think it was more like an empty plot of land with lalang.

At night, Alex and I were off-duty as Tammy had hired someone else to cover the dinner photography. So it was really nice to be a guest for once!! Kee and Sharon had to work as they were doing the video, unfortunately… but that gave us the opportunity to catch some photos of them at work! We enjoyed ourselves tremendously as I caught up with old friends who had traveled from overseas to be at the dinner that night.

Can you see Sharon, right at the back of the room? Slightly blocked, unfortunately. This was taken during a small blessings ceremony before the dinner in Equatorial. Below… my friends doing silly things like balancing the wedding favours between their mouths and their noses.

Finally, a normal photo! If you’d like to view the slideshow that we created that day (express one!!) click on the video below…