This is my first trip to the United States. A couple of days prior to my trip, I was running around like a headless chicken trying to sort out so much work before leaving for 3 weeks. After 19 hours of sitting on planes and waiting at airports, I arrived in Los Angeles. Early the next morning, Alex and I took a flight out to San Francisco. I understand why people fall in love with San Fran. It’s a beautiful place with lots of exciting nooks and crannies. 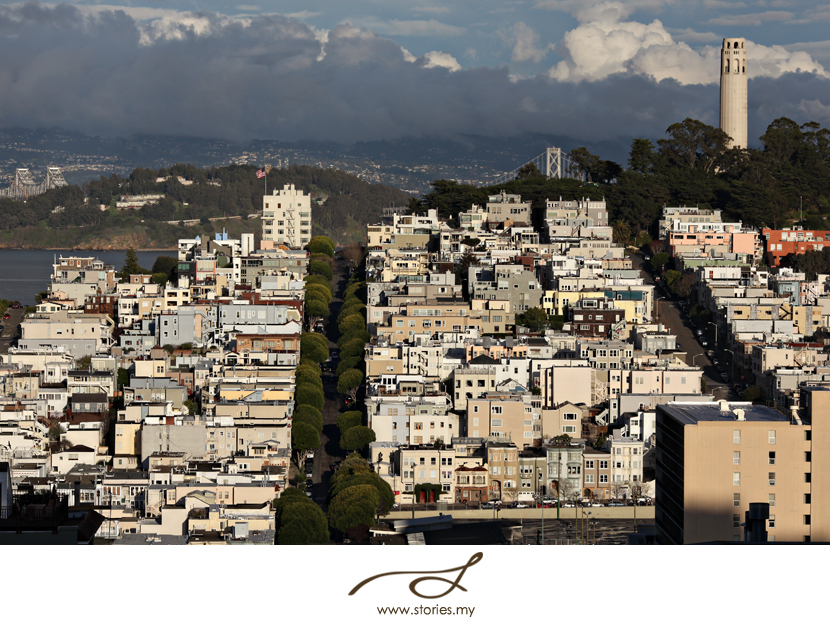 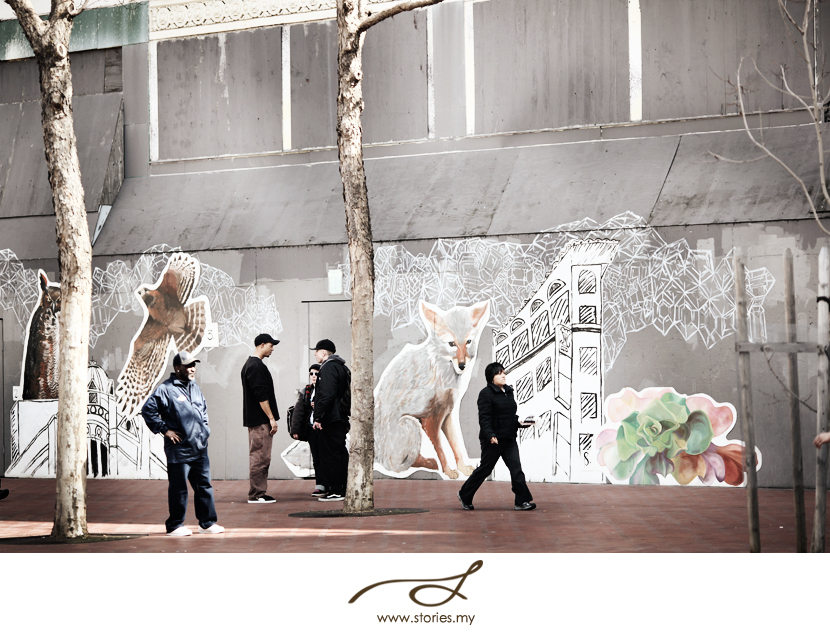 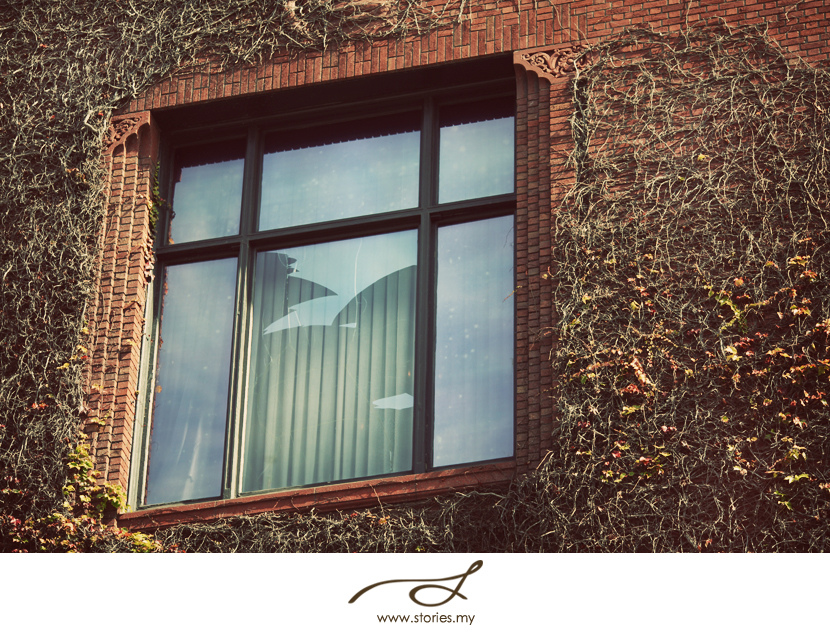 Well, on the first day we arrived in San Fran, I told Alex, “Wouldn’t it be cool to cycle across the Golden Gate bridge?” And so we rented bicycles… 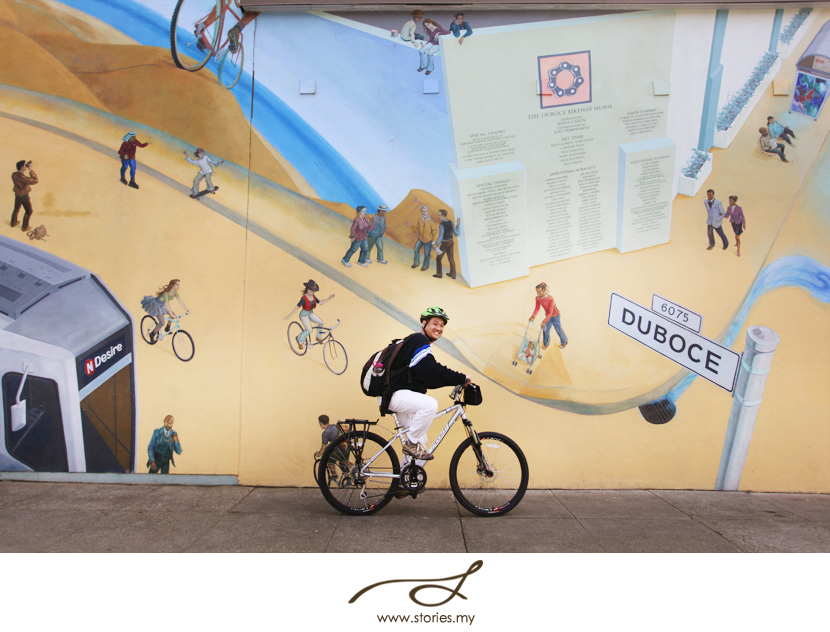 Which, ironically, costs more than the day rental of a car. The bike was USD32 per day, or USD8 per hour.

What we didn’t expect was that we’d be cycling for 4 hours almost non-stop. The ride from the city towards the Golden Gate bridge was lovely but there were some hills to navigate. And it was just soooooo far away!

Luckily there were lots of nice things to see along the way. 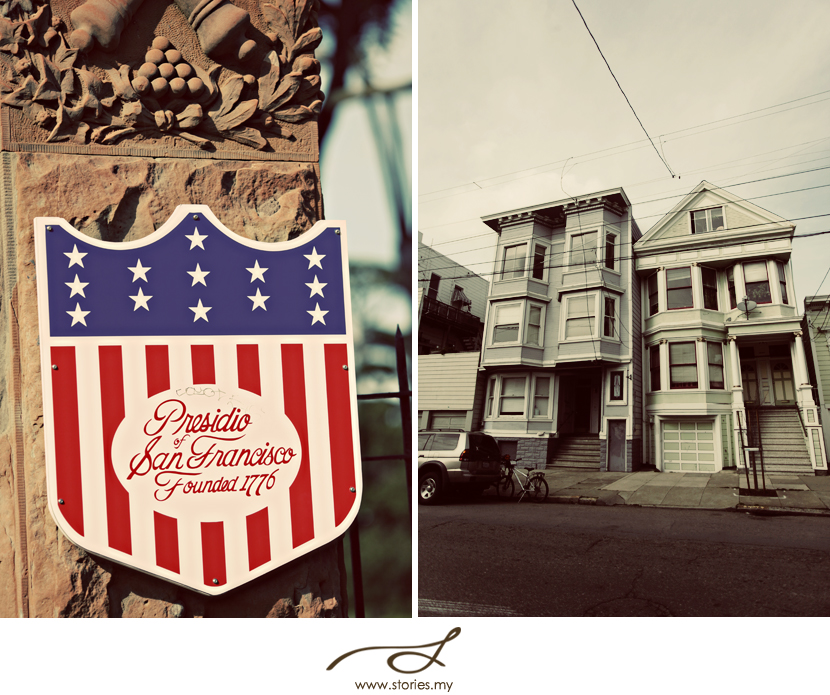 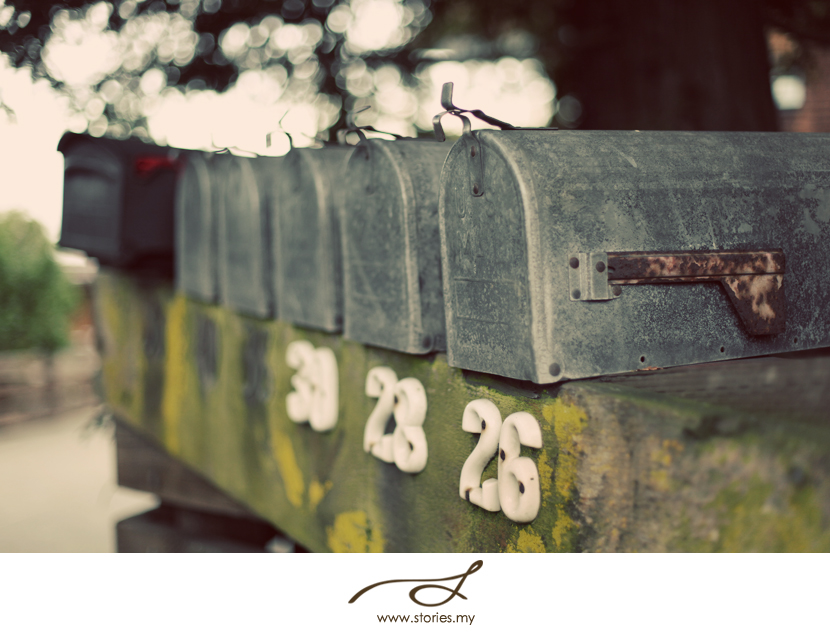 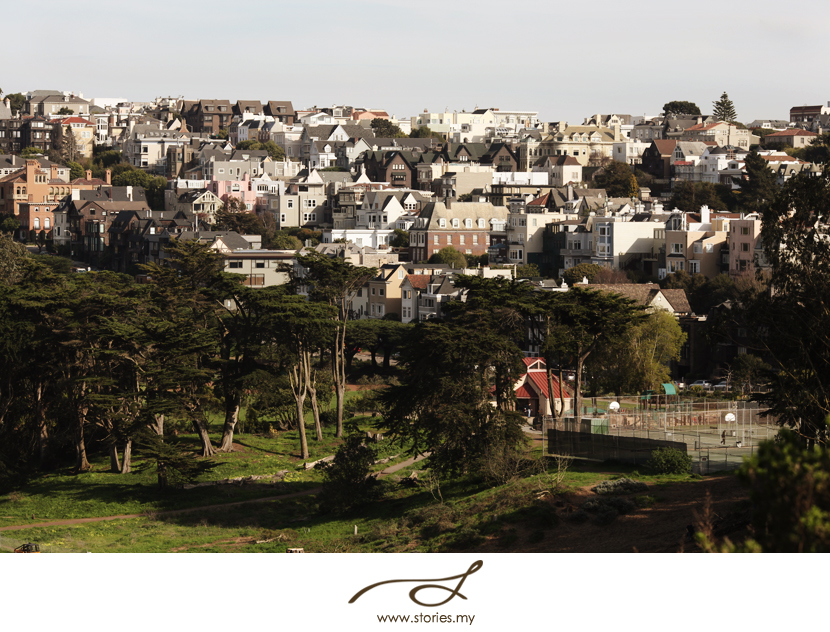 By the time we reached the Golden Gate bridge, our legs were aching and butt muscles cramping! 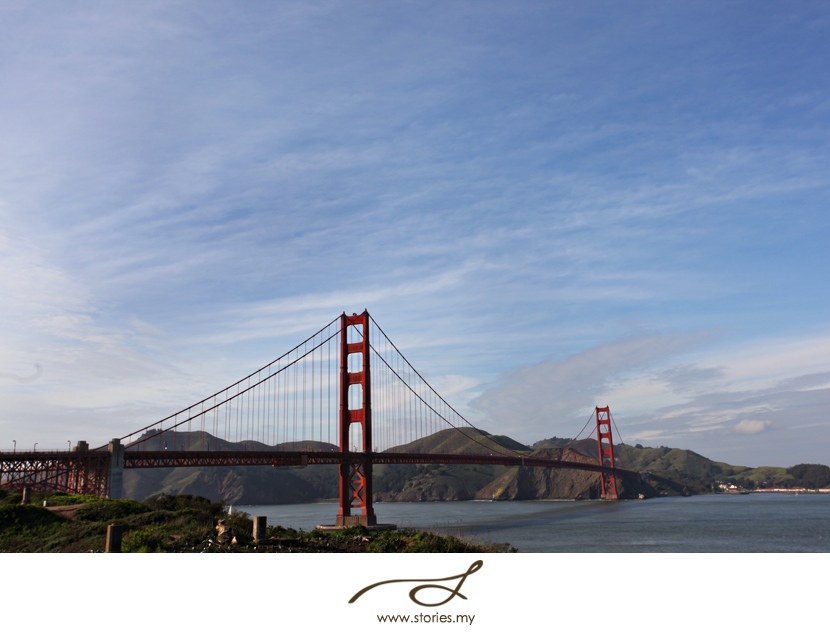 But the bridge is really beautiful. What an architectural wonder. Unfortunately, Alex lost his sunglasses here when we stopped on the bridge to take a photo.

We noticed these signs along the bridge. It’s kind of sad to think that people choose to end their lives by jumping off bridges. Hopefully by having these phones available, it would have saved a life or two. 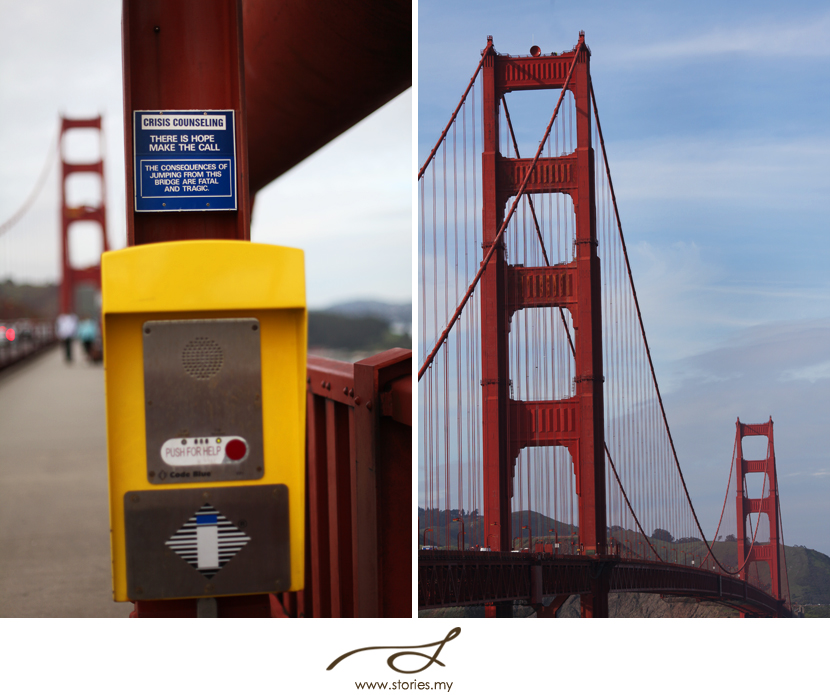 By the time we reached Sausalito, we were just so exhausted! I forgot to take photos then! We took a ferry back to the city from Sausalito and met Jenny Sun & her husband Ju for dinner. After dinner, it took us another hour to get back to the bike rental place because we were trying to avoid going up those steep San Francisco roads! But there was no way out of it.

Needless to say, my legs felt like rubber the next day.

From a lovely sunny day, the next day, San Fran turned gloomy and it rained. The winds were so strong that most of the people on the streets found themselves with flipped umbrellas! 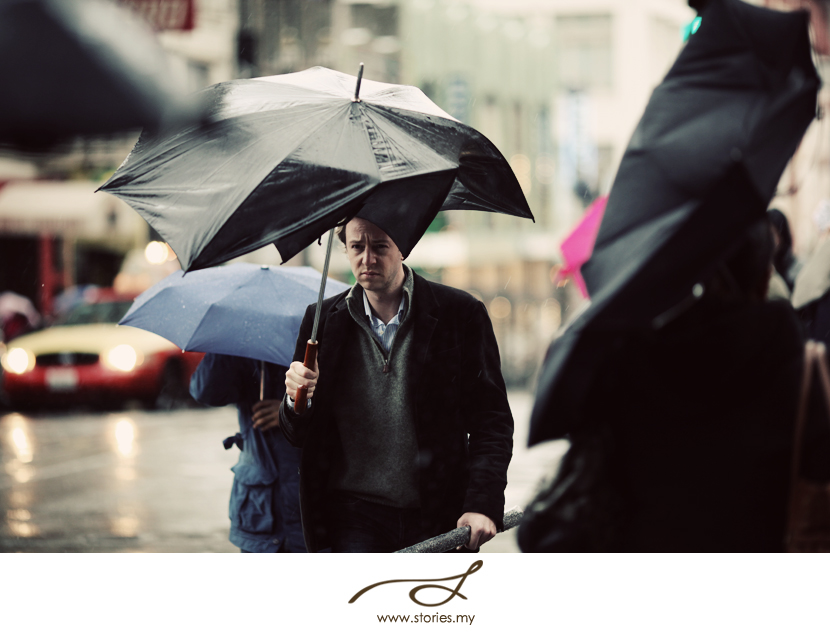 In the evening, the rain cleared a little. We spent most of the day around Fisherman’s Wharf and also visiting Lombard street (the crookedest street in the US). This time, we were smarter. We took the cable car. 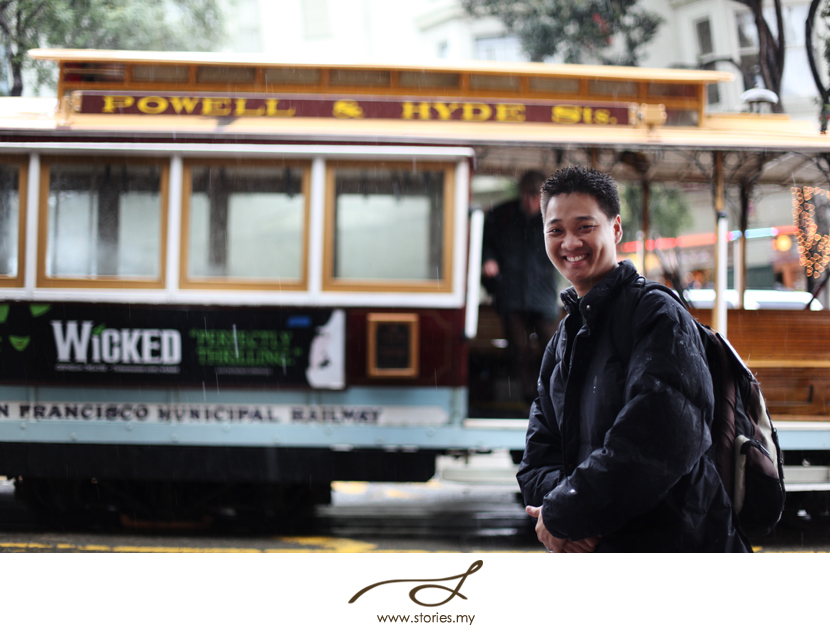 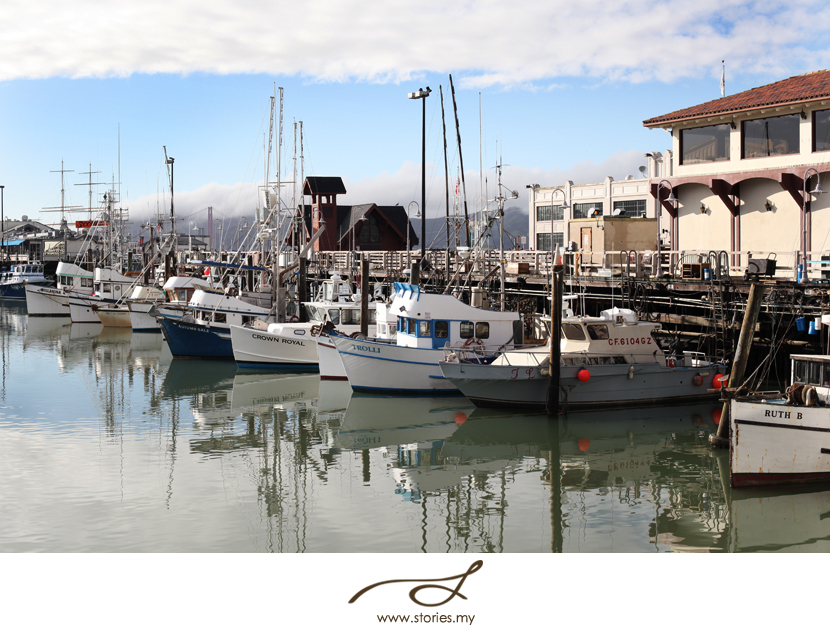 We noticed some men on the streets, asking for donations for ‘canabis research’. Yeeaaaah, riiiight…. 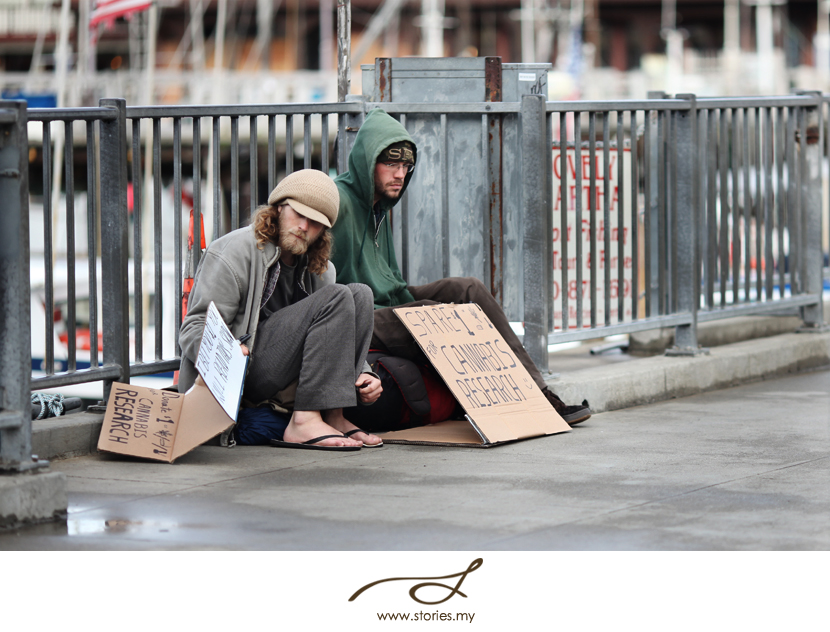 Had a pretty relaxing day and we even had time to take some silly shots of ourselves! 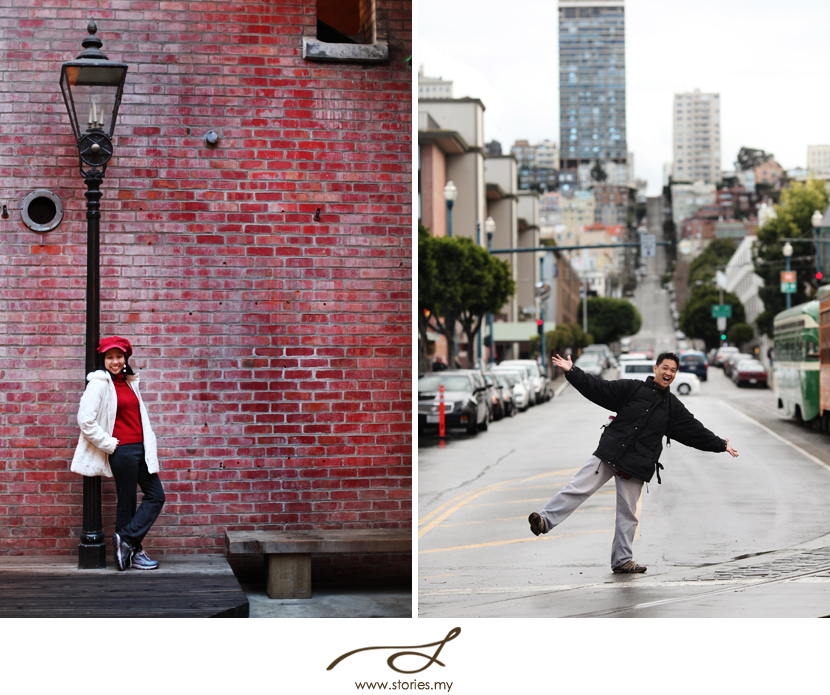 After 2 days in San Francisco, we left with Jenny and Ju for a coastal drive down to Los Angeles. But that’s another blog post. 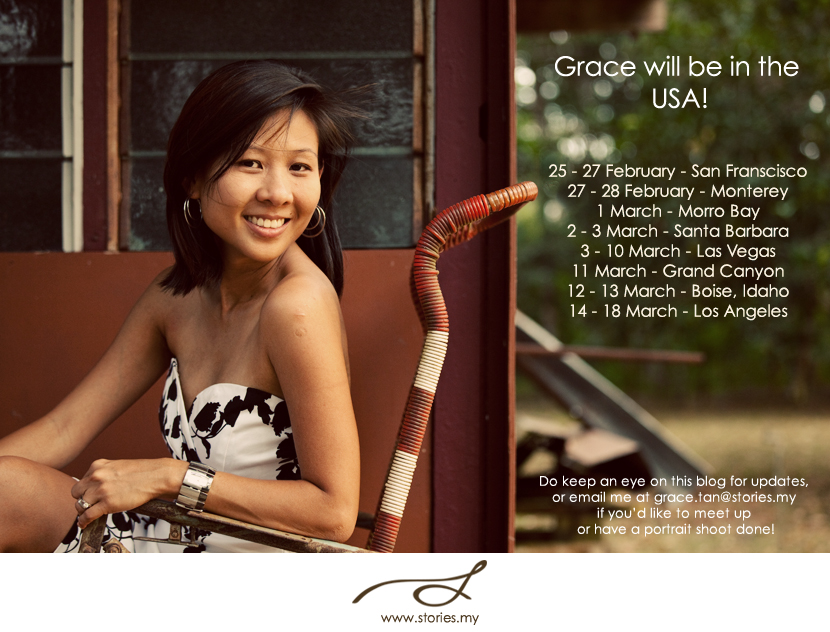 I absolutely love traveling. It is the first genre of photography that captured my heart. I am always excited to see new places, faces and experiencing different cultures. This 24th February, I’ll be leaving Malaysia to travel to the US for a few weeks with my husband Alex.

The main highlight of the trip is the WPPI (Wedding & Portrait Photographers International) conference in Las Vegas from the 4th till the 11th of March. I can’t wait for this conference. It is such a huge event, with thousands of photographers traveling from all over the world to listen to world-renown photographers on topics such as portraiture, lighting, posing, business, commercial work etc.

I believe in investing money for education, and year after year, the Stories team attends various workshops. In order to improve, I believe I must always have this ‘learning’ attitude, even in years to come. At the end of the day, our clients are the ones who benefit, and if they are happy, we are happy too!

If you are living in the States, I’d love to meet up and get to know you – whether it is for a drink or chat, or if you’d like to have some portraits taken.

Do send me an email through the contact us page and I’ll be in touch with you! I’ll be blogging regularly from the States, so do keep watch over this space!