Some Family Portraits (of the other kind)

It’s very normal that certain members of the family get neglected when it comes to taking photos. It’s not easy when your family members don’t want to cooperate even when you offer a treat to them. I’d like to introduce a few extended members of my family but unfortunately, I don’t have many nice photos of them.

This is Tanya (or Tania). She greets me everyday when I go to work, or when I get back from work. She’s young, excitable and sometimes likes to jump on me and land her paws on my outfit, especially when it’s white. When I scream her name, “Tanya, stop it!” she does it again, looking rather proud at her scuff marks on my dress. Other times, she chews my slippers or shoes, and then gets a prompt beating from Alex. He lost the straps to his Crocs that way. Tanya belongs to my in-law’s and is supposed to be a guard dog, but so far, she has failed at her duties. Guests who come by are promptly greeted with a grin and a tail wag. 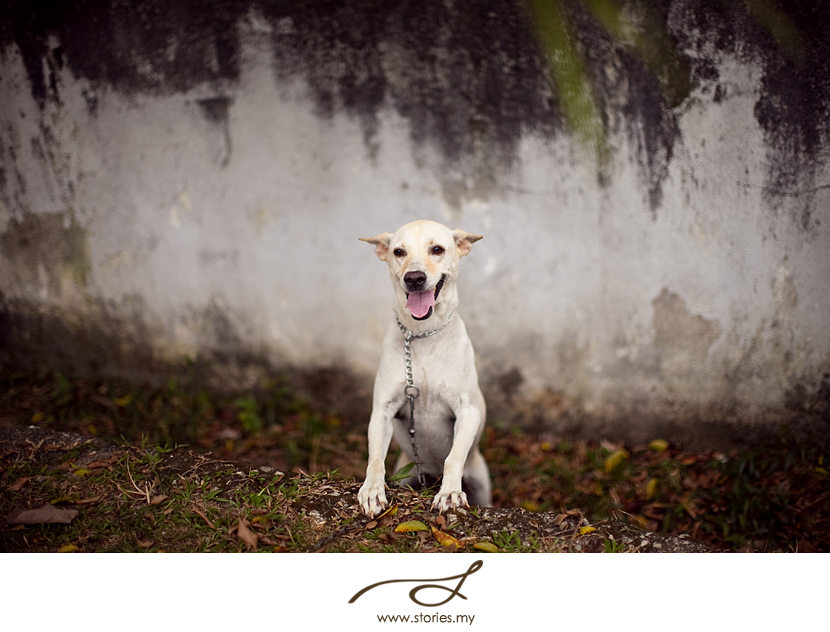 This is Chino. The photo was taken by my friend Eugene some time back. Chino used to live with me, but now he’s freeloading at my sister’s house (while my home is being renovated). Chino likes to run and attack if he thinks you’re fun to play with. Hands and feet are for biting, he says. Oh, and my claws are hurting you? Sorry but I can’t help myself.

Chino is sociable. He loves to visit my neighbours and my sister’s neighbours frequently. If there’s a comfy couch to sleep in, he’ll make himself at home. In fact, this toilet bowl in the photo is not even mine. Unfortunately, he doesn’t realize that his social skills are not of the likable sort. But he doesn’t care. He thinks the world loves him. 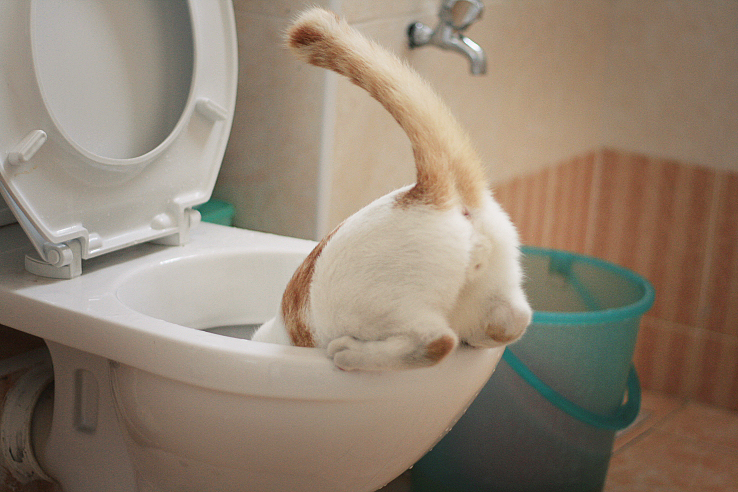 And here’s Paddles the dog and Sugar the cat. My sister’s beloved pets. Unfortunately the other members of the family, Puppy the dog and Mocha the cat refused to join in for this family portrait. They live under one roof in harmony. Sugar is rather embarrassed to have been caught in this pic, getting too cosy with a dog. She is completely anti-social, hates people but loves dogs. When you call her name, it’s a cue to run faster. In the opposite direction.

Paddles is a people dog. She loves loves loves people (x 1,000 times). She loves the water too, in fact, in her younger days, she used to sit in a kayak while my sister went white water kayaking. Now that she’s older, she has a more luxurious lifestyle. Occasionally my sister would allow her to swim in her private pool at home. 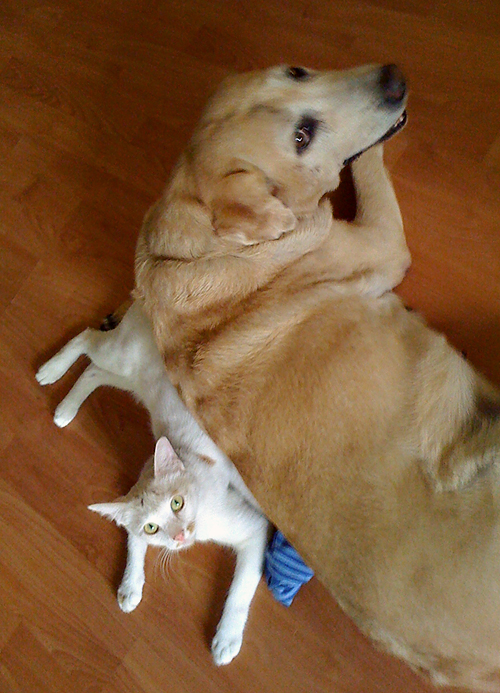 When Chino joined their household a few months ago, he discovered there were political alliances in this family. Sugar hates Chino’s guts and Mocha (also known as Hitler) just bears with him. Mocha’s an old boy, and he’s seen lots of funny things in his lifetime. Mocha has taken a “I can’t care less about you” attitude. Just feed me, darn it, and I’m happy. 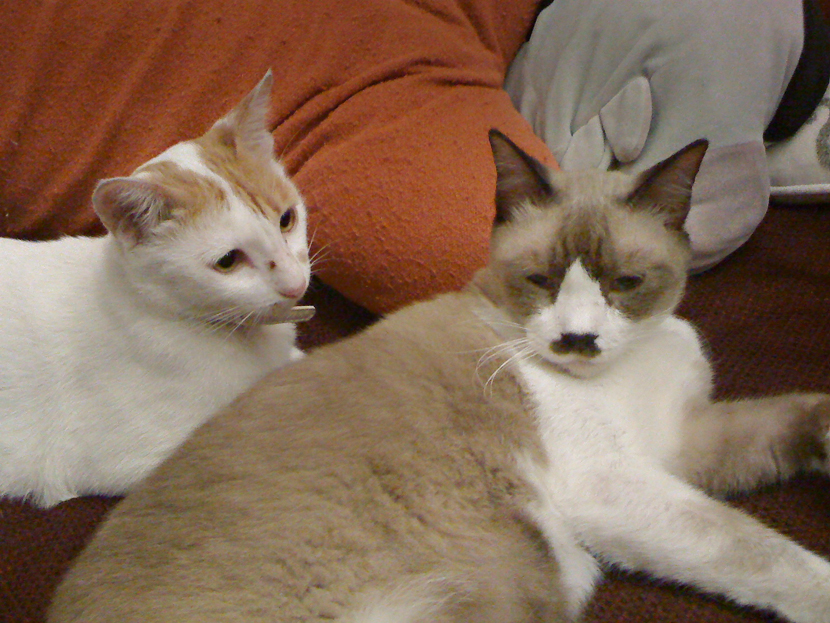 And finally, this is Puppy (on the right, duh!). She is demure, loving, and gentle. She gets along with everyone. Puppy was an abandoned dog at my sister’s office and was adopted into the family years ago. Puppy will come to me and look adoringly into my eyes until I give her a little pat on her head. 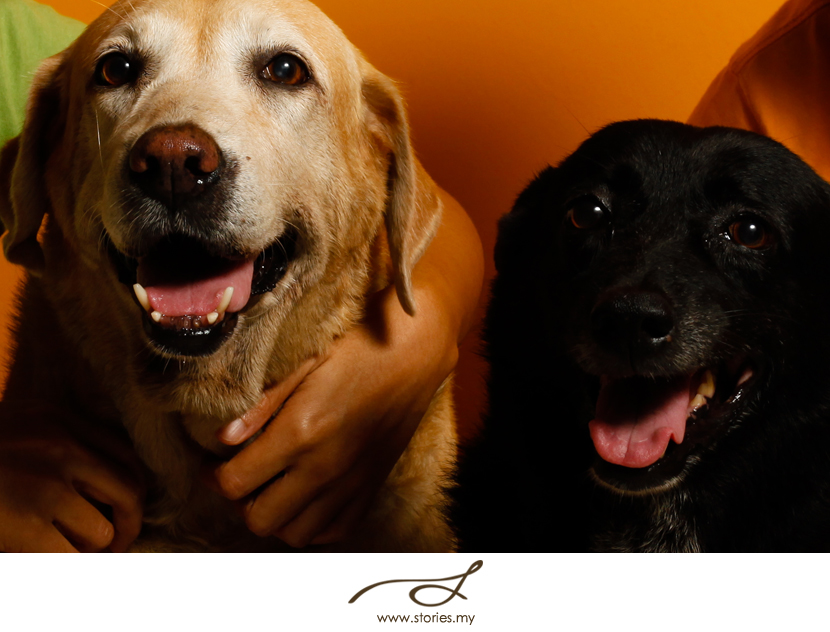 My brother always says, “There’s drama in the Tan household”. With so many animals in my life, there’s definitely drama. Thank goodness they don’t ALL live under the same roof. I still have hopes that one day, I’ll be able to get a full family portrait. I don’t know how, but it’ll be a miracle when it happens.