It began a long, long time ago in 1997, when they were just 7 years of age. On the second day of school, he kicked her in the butt when she annoyed him, which was a very interesting start to a ‘beautiful’ and colourful relationship. Since then, every time they met at school, they would fight and scream at each other, until friends had to intervene. This was almost a daily occurrence, as they could not stand the presence of each other. To make matters worse, as if it was not bad enough, they suddenly discovered that they were attending the same Sunday School. All hell broke loose. This chaos went on for years, until the year 2003.

That March, his family shifted away from PJ, leaving her behind. He was enrolled to a boy’s school, while she continued to go to her regular school. During this period of absence and peace, both of them hit puberty.

At the end of every year, he would come down to PJ during the school holidays. During that period, he would still attend Sunday School where he would bump into his long time enemy and arch nemesis and the fighting will start.

However, towards the end of 2005, things took a sharp turn, as he matured and became less volatile. It was then too that he suddenly felt a slight and unexplainable attraction towards her. He was astonished to see all those incredible changes she went through during puberty. It was as though she had just morphed into this beautiful and very attractive teenager.

It was during these moments that he decided to once and for all put an end to all their constant fighting and arguing. He took the first step by composing an apology letter for her. This incredible gesture, left a very deep and positive impression on her, as she accepted the letter. They became friends and in 2007, started a real and beautiful love relationship. 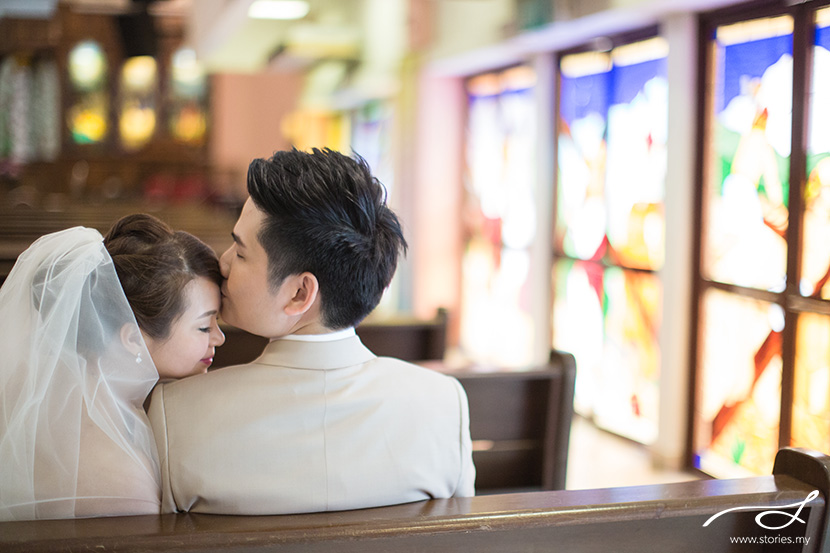 It was April 2012 in Melbourne, Australia. The Overseas Christian Fellowship Easter Camp was starting soon, but Matthew was hesitant about going. But at the last minute, he changed his mind, and it was there that he met beautiful Wai San. Eventually, after the camp ended, they became friends and he plucked up enough courage to ask her out on an ice-cream date. It was a ‘hot’ date as they sat and chatted for more than 3 hours over ice-cream!

She thought, “He seems quite smart (something I like!). Maybe a little too skinny but overall, ok lah!”

Well, Matt couldn’t get pretty and cute Wai San out of his mind since that first date. Four months later, he decided to take things further and asked her to be his girlfriend before he took her to a musical and presented a nice necklace to her.

For 3 years and 11 months, they shared a lot of things in common, like their love for board games, traveling and food. In that first 12 months of dating, Matt changed from a skinny guy to a more chubby man as he put on 12kg that year! I guess love makes you ‘fuller’!

So in 2016, Matthew and Wai San are married! Their wedding was held at St Peter’s Parish, Bangsar and their dinner at Sheraton Imperial, KL. She had always dreamed of a fairytale wedding (as a princess to a dashing groom) surrounded with lots and lots of pretty flowers and bunny rabbits! (you’ll see what I mean later).

Unfortunately, due to an unexpected turn of events, Wai San’s father passed away before their wedding. I had the good fortune of getting to know him months earlier at Wai San’s sister’s wedding, which I also photographed. I felt really emotional at Wai San’s wedding, knowing that she would very much have loved to have him there, but honoured at the same time to have created beautiful images of their family at Wai Wai’s wedding earlier.

Wai San, seeing how your family held together through that difficult time with the support of your loved ones was truly inspirational for me. At your wedding, you were truly the princess your dad would have been proud to see. Matthew was indeed the most supportive and dashing prince who knew how to lift you off your feet, and into his arms. Have a beautiful marriage, you two.

END_OF_DOCUMENT_TOKEN_TO_BE_REPLACED

I’ve known Elaine since I was a young kid and a wee bit shorter than what I am now. Some friends have told me that convent girls from Malacca have a distinct ‘look’, and I suppose Elaine and I fall into that category. It must be our loud laughter and carefree nature (or I’d like to think so!). Well, whenever a Malaccan girl gets married, and especially to another Malaccan boy, it is a cause for a huge celebration. The wedding was planned more than a year in advance, and I distinctly remember our conversations via MSN about the wedding. In fact, we started talking about the wedding in June 2010.

Yup, it’s every girl’s dream to plan for her wedding. Like waaay in advance. But I wonder if Elaine actually started her wedding planning even earlier than that. You see, she was childhood friends with Kevin ever since she was a 2 year old toddler. I can’t remember a single thing from when I was 2 (could be due to my bad memory). They were best friends till the age of 5, then lost contact with each other for years, until they were reconnected 20 years later! Talk about an amazing story!

So end of 2010, Elaine contacted me again to talk about her wedding and initially she wanted to have it at our old school chapel in our primary school, Convent of the Holy Infant Jesus in Malacca. I was really excited about it because I have fond memories of that chapel, even though I wasn’t a Christian at that point in my life. I always remember it as being serene and ancient.

Unfortunately that plan didn’t quite work out and the wedding was held in St Peter’s Church in Malacca. That church has a 300 year old history, so I was excited about it too! My parents used to attend that church too when they were living in Malacca and so this church was significant to me.

To make this wedding even more exciting, Elaine requested for Smurfette, my vintage VW kombi to make it’s first wedding appearance as the bridal car! Thank you Kevin and Elaine, for making everything so memorable for me. I had an awesome time, and I am amazed at the level of detailed planning that went into the wedding. Elaine, thanks too for the card and gift. It was really sweet and thoughtful of you.

Ok so on to photos from the wedding… 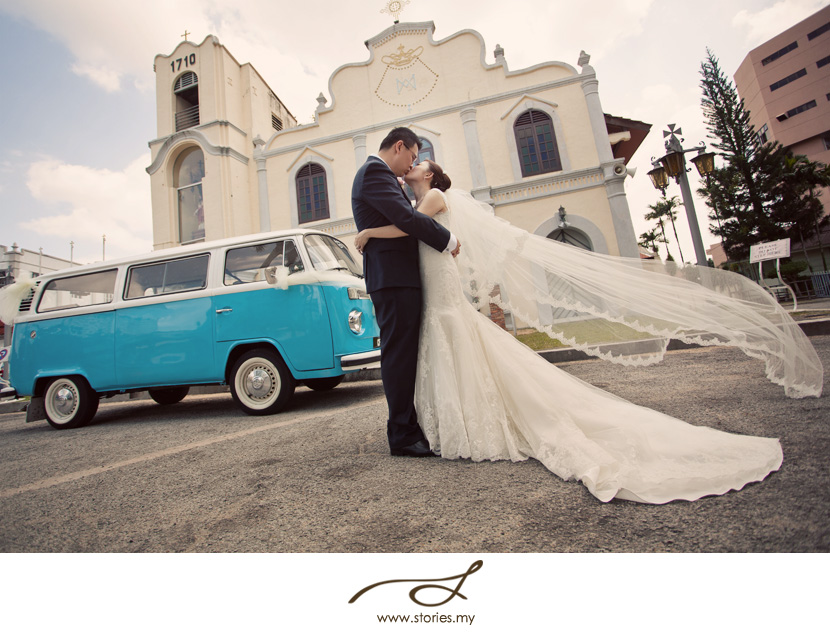