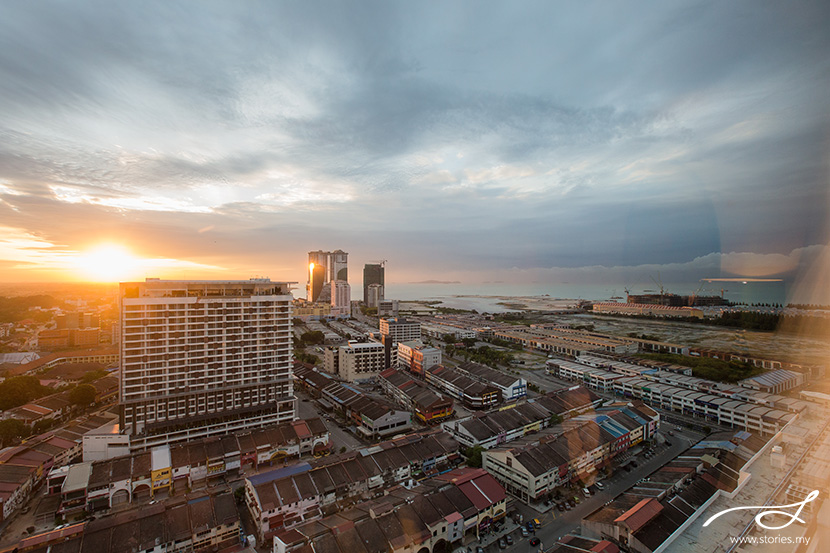 They are like two peas in a pod that fit together so cozily. Each different in their own ways but yet sharing a solid and grounded relationship built on trust. They liken their relationship to a blue-chip stock… with very little fluctuations and steady growth! That shows just how down-to-earth they both are.

They met in university in Malacca and maintained a long-distance relationship for a number of years after their studies before Hui Yen relocated to Singapore to be with Weng Yue. They have not looked back since. Life together is comfortable, with very few “high volume” moments. They are self-proclaimed non-conformists (but not intentionally!) and that is part of what keeps their comfortable life exciting, we suspect.

The wedding was held in the beautiful town of Malacca, where Weng Yue hails from. His mum is Nyonya so there were lots of Nyonya elements incorporated in the wedding. This easy-going couple made the team feel very much at home with them and were game to pose even under the hot sun with no complaints. Thank you Weng Yue and Hui Yen, for your kind hospitality in Malacca. We wish you both a lifetime of fun, happiness and adventure in your marriage! 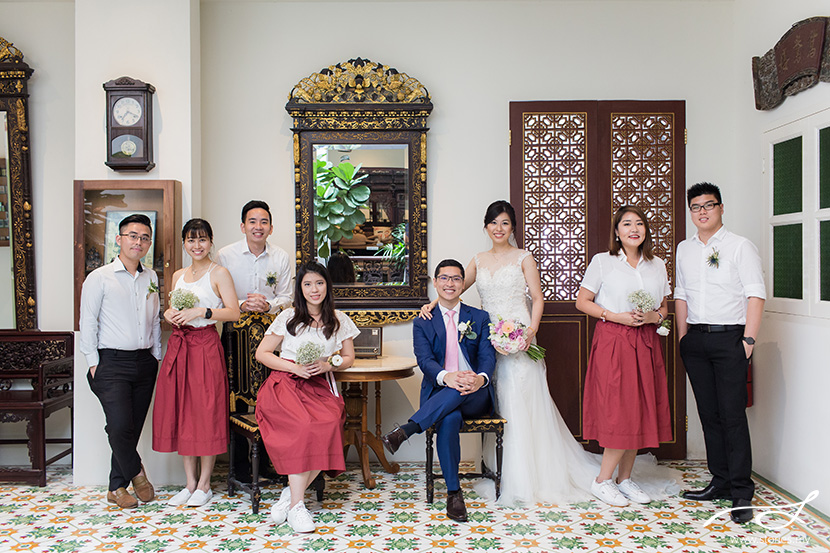 END_OF_DOCUMENT_TOKEN_TO_BE_REPLACED

Some time back, I photographed some portraits of Joanne for her 30th birthday and it was on that shoot that I met Si Howe. He struck me as a really fun loving, supportive guy who was ever willing to give Joanne a hoist to entertain her ideas of climbing trees for pictures. As we got to know each other more later, it struck me that they were two opposite personalities totally in love with each other. Si Howe, an obvious extrovert, was telling me all about his Ipoh wedding at his family courtyard home (where EVERYONE in their family holds a wedding!) and enticing Nigel and I with stories about giant Tanjung Tualang prawns served during the luncheon.

Needless to say, we were definitely looking forward to this wedding!

We were really smitten with the wonderful classic family home that we had the privilege of shooting in. Since Si Howe’s family was a large one, the tea ceremony took quite a while, serving approximately 180 people! One of the biggest challenges we had was doing a huge family photo that could accommodate everyone. At the entrance of the home (image below), it was hot in the midday sun, so to get everyone to stand / sit there even for 15 minutes would be really challenging. But the worst thing is that everyone would be squinting as they had to look towards the direction of the sun. So we moved everyone to the back of the house instead for the photos. Though it was very warm still, at least people weren’t squinting as much! 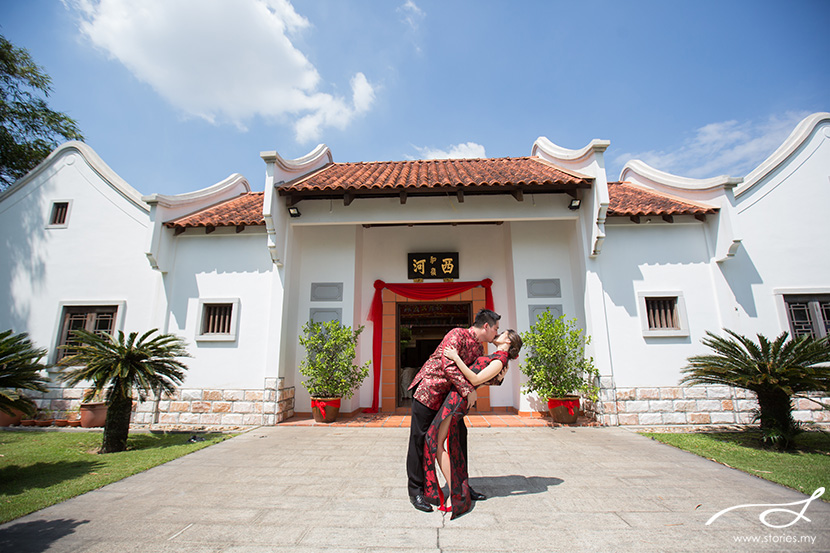 I love this marital bed that symbolises their union. Si Howe told me how he and another cousin  had to painstakingly take the bed apart from another cousin’s home and transport it to this place. And then he had to put it together again, pretty much like a jigsaw puzzle. If you look carefully, you will see his yellow sticker notes on the bed frame which we ‘conveniently’ left in the shot. Tells a story! 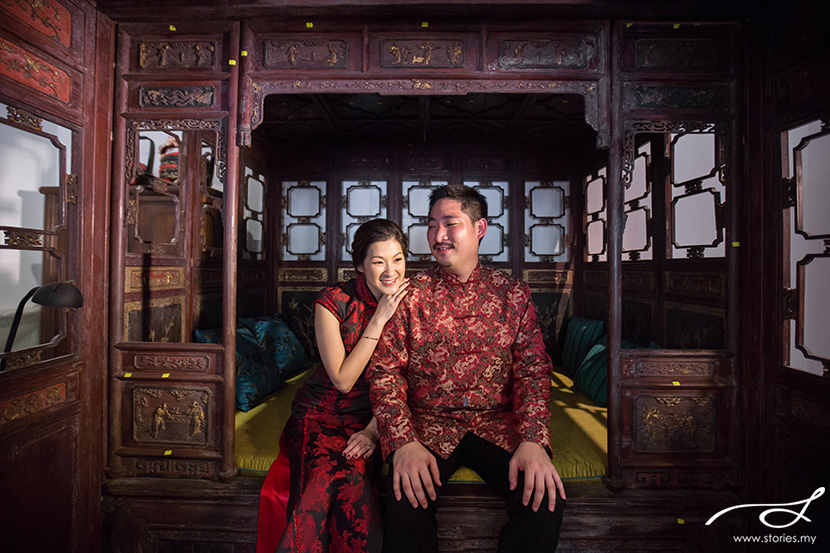 END_OF_DOCUMENT_TOKEN_TO_BE_REPLACED

Jeremy and Sarah’s wedding was held at the beautiful Christ Church in Malacca. Being an 18th-century Anglican church, its Dutch Colonial architecture style and colors are unmistakable, as was the chemistry between the Sarah and Jeremy. 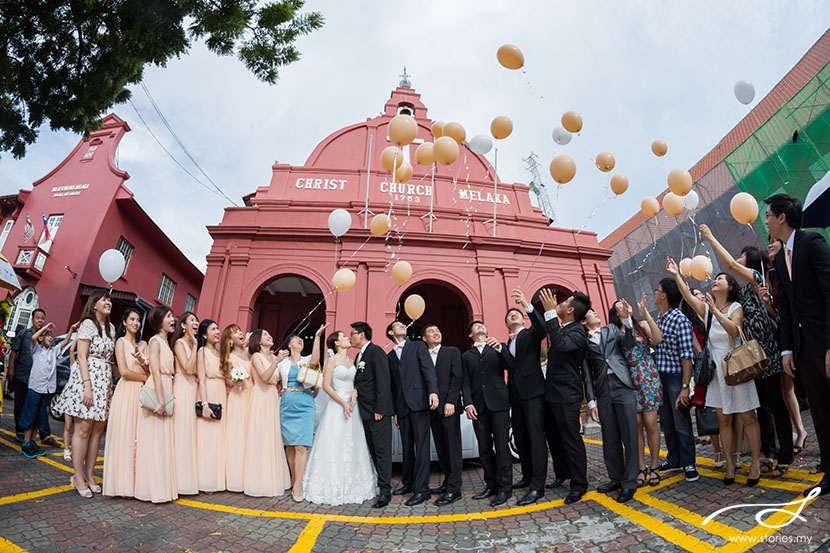 Jeremy “likes to think of himself as an outdoorsy person”. And by the way that sentence was constructed, yes, we know you wrote that about him, Sarah! Hehe. Apparently, he loves hiking, kayaking and soaking up the air too. When I close my eyes, I can almost see him hiking up a mountain and kayaking down a river valley, with the song “Ain’t No Mountain High Enough. Ain’t No Valley Low Enough” playing in the background. I’d say – Ain’t no river wide enough, to keep Jeremy from getting to you, Sarah.

Then “they” describe Sarah as more of an extrovert who has a soft spot for animals and all things quirky. She loves creative writing (no wonder she works in the media industry!) and little does she know that we found out that she’s actually published “The tale of a Malaysian girl in NUS” in 2012. Wow! Congrats Sarah!

By the way, a little bird also told us that Jeremy likes a Facebook page entitled “Sleeping with one leg out of the covers”. Now, I bet you didn’t know that about the groom. 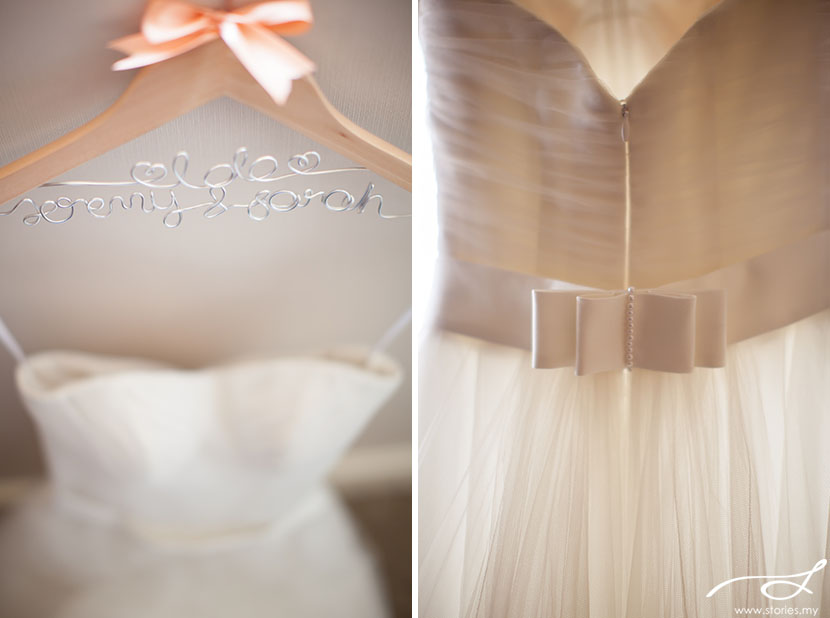 END_OF_DOCUMENT_TOKEN_TO_BE_REPLACED

As I was growing up in Malacca, I always wondered who lived in this really grand, elaborate home along Heeren St. It is undoubtedly the nicest looking building on that street, and usually many tourists would stop by and take photos of the house. When we photographed the wedding of Dexter and Michelle, I was excited to hear that I would be entering it for the first time ever. It was Dexter’s ancestral home, and we had full access to all the floors! Naturally, as we were shooting in the front yard, tourists stopped to take photos!

Dexter and Michelle’s wedding was a 2 part event that started in KL and ended in Malacca. Where can I start about this couple… well, I first met them at the Westin wedding fair where they signed up for our photography and cinematic film service. It was an instant click – the feeling that you have bonded with someone even though you’ve only just met. They were humorous, ‘in-your-face’, fun, spontaneous… I guess part of it had to be the fact that Dexter is from Malacca…and you know what…Malaccans are a FUN and loud bunch! (Read: Grace is fun and loud too).

We created a fusion slideshow for them to show the next day at Equatorial hotel. Look out for the middle part of the slideshow where he strides in and lifts her off her feet! 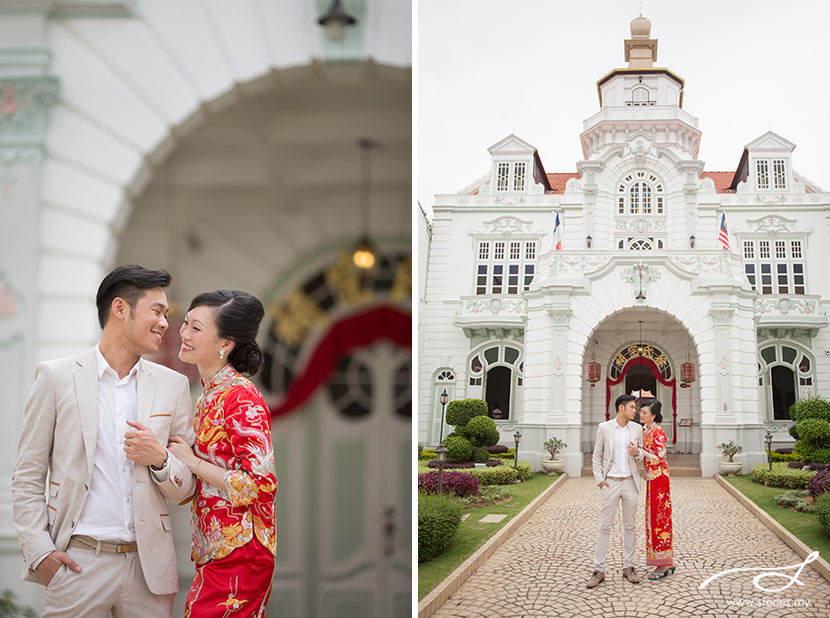 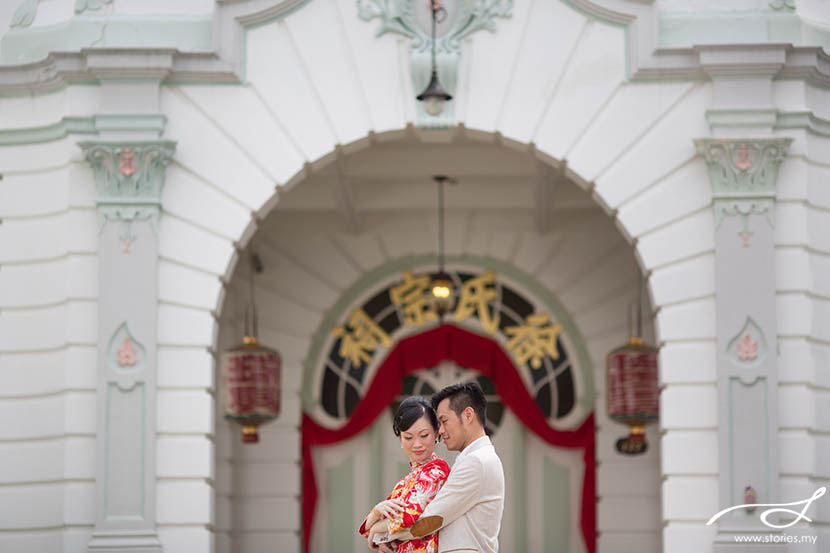 END_OF_DOCUMENT_TOKEN_TO_BE_REPLACED

Our 3rd Bloom Workshop was held in beautiful, heritage Penang where tradition meets modern art ideas and creativity abounds. As usual, we had the support of wonderful sponsors such as Schmidt Marketing, WCA Fine Arts, Simplr, Kitty Bakes, My Hyper Store, Black Milk Studio, Barnyard & Prairie and That Special Occasion. Our 3 day workshop focused entirely on the art of posing and portraiture, and the participants had a great time with the theoretical and practical sessions.

I personally find teaching satisfying, though pretty exhausting. I’ve conducted about 20+ workshops and also taught photography and film editing to college students through out the past 8 years. It’s a challenge to think of how to verbalize your thought process and simplify it to students. I guess the good feedback I receive from my previous participants have shown that I am doing some things right!

If you ask me, I don’t think I’ll ever give up actual photography work for teaching. I still love creating images through my lens and making my clients happy when they see those images. But every now and then, you’ll find a workshop or two coming your way from us.

Here’s some highlights from the workshop. Enjoy! 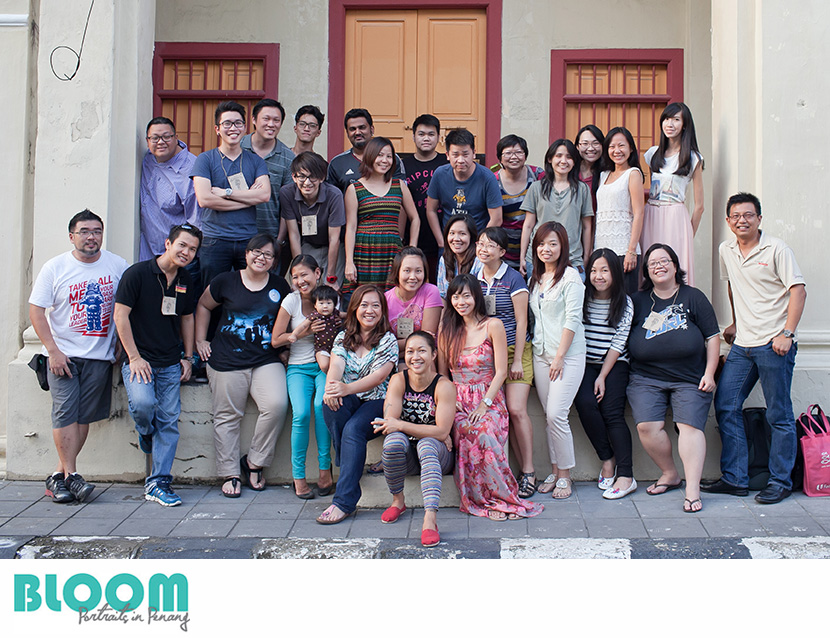 The four Bloom girls speaking at the workshop – Anna-Rina, Fiona Lim, Asther Lau and myself. 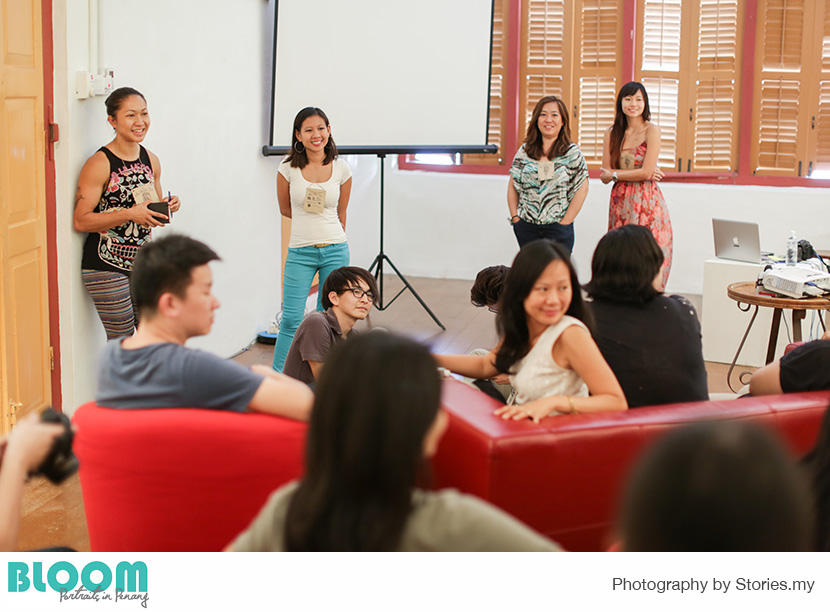